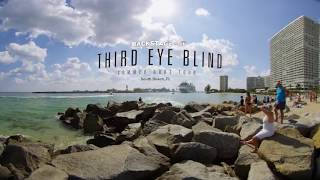 Third Eye Blind are playing the Blue Hills Bank Pavilion in Boston on Wednesday June 21st and you can watch the entire concert live via NextVR in 360° video. It will basically be like being at the show but while you're sitting on your couch or out with friends. Check out the video for more info:

Fans have been asking for the list of songs on the Summer Gods Pre-Show playlist so the band decided to share their mixtape with the fans. You can listen to the mixtape via the fine folks at Spotify by clicking on the image below. Here is a list of the songs included: This Girl - (Kungs vs. Cookin on 3 burners) Redbone - Childish gambino Classic (ft. POWERS) The Knocks Steal My sunshine - Len Paradise - "Wild Nothing" Blind - Hercules and Love Affair Green Light - Lorde Here

Third Eye Blind's Summer Gods Tour opened this weekend to filled venues in Miami, Clearwater, and Jacksonville, Florida. Fans came out in full force to celebrate the 20th Anniversary of the band's debut album to hear 3EB play the album in its entirety. If you haven't gotten tickets for the celebration in your town, get them here. Check out some images from opening weekend: